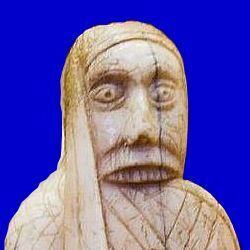 About:
My main interests are digital humanities and archaeology (M.A. in prehistory and physical anthropology) and chess. As a mixture of them I do reasearch on the history of chess and other table games.

Ingram Braun 1 week ago friendica
Today I finally released the latest build of my archive.pl script. Due to its massive changes I decided to increase the main version, although there is no incompatibility to prior version calls.

The Royal Game Of Ur https://t.co/sO0pV9CLYW

This chess piece is a rook, dated c. 11th–12th century
from Western Islamic Lands, made of earthenware and glazed

A great example of an abstract Arabic medieval rook. I love to see it in three different views.

The Metropolitan Musem of Art pic.twitter.com/Rz2BDKkMtF

They don't make board games like this anymore pic.twitter.com/mtvOzUoFZw

What's the deal with the Maya ballgame? Time for a #QuarantineLife thread!

When the Spanish arrived in what is today Mexico, they were amazed to watch people playing a game unlike anything they had a seen before; a game with a bouncing rubber ball! 1/11 pic.twitter.com/Gubzlu3Xki

As of today, I've put 1000 pieces of evidence for games from around the world in our games database. Check it out at https://t.co/NAEhJtPKvo or https://t.co/IvpNd2vv1y! https://t.co/BVQDyjaoe0

This die is an incredible icosahedron (twenty sides), made in Egypt, Ptolemaic Period–Roman Period. (2nd century B.C.–4th century A.D.), made of Serpentinite

Sides are inscribed with Greek letters, likely for gaming or divination (same thing!)

The Metropolitan Museum of Art pic.twitter.com/yHeL4VpsCk

https://t.co/C410916oBO is starting to take shape: content is being written - https://t.co/OlNIjuvTIl

Today's a big day for us! We have officially entered *1,000* pieces of evidence for ancient, medieval, and modern games from across the world! 😊

Received the Tillerman King tafl man! And a wooden Lewis chessman stand-up. Beautiful, and Miss Julie agreed. And she willingly took the stand-up :)

Here it is with the thenty Trondheim board that is still in progress...

Thanks to Mike at Tillerman! pic.twitter.com/kGYQLL8uwT

Calling all chess players (especially women): my friend is investigating the gender differences in the participation and performance of chess players. Help her research by filling in this short survey. Definitely worth 2 mins of your time! https://t.co/EnvLs4eHzR pic.twitter.com/eDknwQrrDM

Byzantine Princess Anna Komnene writing about Emperor Alexios I (c. 1148), is relevant for those anxious about current events:

"In order to sweeten the brine engendered by his many anxieties, the Emperor occasionally played at chess (zatrikion) with one of his relations."

The Lewis chess pieces in the @NtlMuseumsScot are amazing, and look wonderful in 3D, where you can view some individually.

Just look at the back carving of this chair. Absolutely stunning. #StayHomeSaveLives

The @britishmuseum is doing #MuseumFromHome right: Our favourite bit of Norse 🏴󠁧󠁢󠁳󠁣󠁴󠁿 #archaeology, the Lewis chess and gaming set, can now be viewed *and* printed in 3D via @Sketchfab with an audio introduction!

WOW. The @britishmuseum is doing #MuseumFromHome right: Our favourite bit of Norse 🏴󠁧󠁢󠁳󠁣󠁴󠁿 #archaeology, the Lewis chess and gaming set, can now be viewed *and* printed in 3D via @Sketchfab with an audio introduction!

After a week of self-isolation, when you've run out of biscuits... pic.twitter.com/JnTQ5yfBXg

A most unusual 5x7 chessboard!

What is your Lewis Chessman response to #selfisolation? pic.twitter.com/Uhq1Ozncvy

Oooh! Love this thread. Here is my collection of editions of Hoyle 1742-1868. pic.twitter.com/tuAhwPQSov

The Genteel house-keepers pastime, or, The mode of carving at the table represented in a pack of playing cards ... 1693; complete work digitized: https://t.co/5Y8LFUypYg pic.twitter.com/p8frExOAbn

The use of the geometrical playing-cards, as also A discourse of the mechanick powers. By Monsi. Des-Cartes. Translated from his own manuscript copy. 1697. Complete work digitized: https://t.co/PVgm8h6BDc pic.twitter.com/2EF3zQrrYb

If you are on lockdown #confinement like me, you might find it helpful to have a compilation of recent free online ressources (though some require institutional access). This thread is not exhaustive, but I hope it helps:

I love the realism of both horse's armours!

The Metropolitan Museum of Art pic.twitter.com/TQdDtZlcP4

The Metropolitan Museum of Art pic.twitter.com/M9TpE4Lw8h

This chess set, 18th century, belonged in the family of Benjamin Franklin, probably owned by him. Made of fruit wood.

Knights are very peculiar, maintaining the same pattern as the bishops.

Too shy for a #selfie? Paint your family! Sofonisba Anguissola dealt with #sexist access problems to art academies and male nude models by painting her family instead (clothed). Left to right: Lucia, Minerva, and Europa Anguissola. #Renaissance #womensart #womenartists pic.twitter.com/luZcdW8Omv

The Met Opera Streaming Free Operas Online to Get You Through COVID-19 https://t.co/jgHABehQQm pic.twitter.com/v0MetGfrWm

The one and only Georg Marco in 1915 #chess #chesshistory pic.twitter.com/SANUwhGuNs

This is an excellent decision! It would be a wonderful thing of other publishers with large platforms chose to follow this example, wouldn't it?! #Mediävistik https://t.co/w4lSBSI8wB

The @britishmuseum Curator's Corner videos are a great resource for #MuseumFromHome. Thank you for sharing, @CarolineLawrenc https://t.co/kEzhfXdvOh

Later posts Earlier posts
This website is tracked using the Matomo analytics tool. If you do not want that your visits are logged in this way you can set a cookie to prevent Matomo / Piwik from tracking further visits of the site (opt-out).